Cognitive psychologists call the ability to see gains in one domain after training in another, transfer. In general, across most cognitive abilities like memory and attention, it’s very difficult to get transfer across domains. This means you should be wary of any program claiming to improve your memory in general or your attention in general. While you can greatly improve at the tasks you are training on, it’s very unlikely that you will improve on those cognitive abilities across the board. For a review of the research on brain training games, see this interesting article from the Association for Psychological Science.

If you want to improve your selective attention, practice at the task you are having trouble focusing on (Diamond, & Ling, 2016). For example, if you’re a student who finds it difficult to study in a noisy environment, you should practice studying in increasingly noisy or distracting environments. Studying in a quiet space will have the short-term effect of allowing you to focus for that study session, but in the long term it won’t help you deal with noisy cafes, roommates, or rude library patrons. If you have trouble focusing on a work assignment and blocking out email messages and text notifications, practice ignoring them. Set a timer that lets you know when you can take a break from your task and check email and your other notifications. Work towards longer and longer blocks of focus time on your task. The more you practice ignoring distractions, the easier it will be. 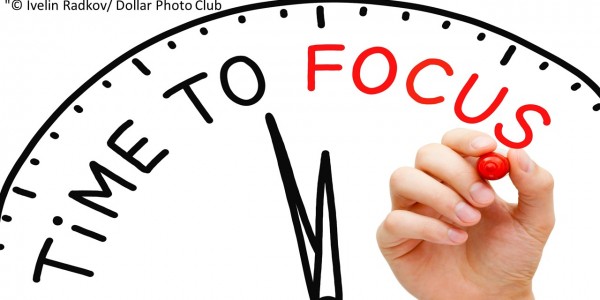 If you haven’t already been convinced that you should improve your selective attention – whether it is your ability to focus in lecture, focus on the subway, or just focus on your email – there’s a lot of research on the negative effects of poor focus. For example, research on mind-wandering shows that people perform worse on tasks when they are distracted by mind-wandering (Unsworth & Robinson, 2016) and feel less confident in their responses compared to those who are not distracted (Sauer & Hope, 2016). These issues are compounded when the task you’re supposed to be focusing on is a complex task (Adler & Benbunan-Fich). Getting distracted while folding laundry has less disastrous consequences than losing focus while studying or driving a car.

For the rest of this month we’ll be exploring the topic of selective attention, or focus, and how it affects students and teachers in the classroom. We’ll also be discussing how cell phones and other devices hurt our ability to focus and what steps we can take to avoid these harmful distractions.

Diamond, A., & Ling, D. (2016). Conclusions about interventions, programs, and approaches for improving executive functions that appear justified and those that, despite much hype, do not. Developmental Cognitive Neuroscience, 18, 34-48.

Sauer, J., & Hope, L. (2016). The effects of divided attention at study and reporting procedure on regulation and monitoring for episodic recall. Acta Psychologica, 169, 143-156.

One thought on “Keeping Focus in Focus”